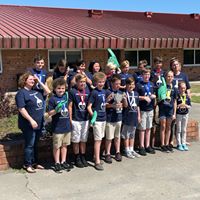 As part of our ongoing effort to increase interest in the STEM fields, offer additional academic opportunities for our most curious scholars, and prepare students for the rigors of academic competition, we introduced Science Olympiad into 3rd-5th grades.  This new team turned in a stellar performance by placing first overall against twenty Varsity and JV teams from 12 different elementary schools in Brunswick County and surrounding areas.

The competition, held last month at West Brunswick High School, was the culmination of months of hard work and preparation. In January, under the leadership of Mrs. Allen-Down, Mrs. Easterling, and 13 devoted parents, students began meeting and working on Tuesday and Thursday afternoons. Each team member competed in 2-3 events after spending countless hours studying and/or building multiple designs to train for their competition.

Each student’s hard work was instrumental in the success of the team, since the scores of the individual events contributed to the team’s overall win.

The Heat is On– Annabelle Miller and Anna Scott Witzenman

Congratulations to everyone who participated in the Brunswick County competition! We are proud of you!